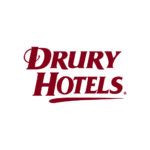 The Drury Plaza Hotel in Santa Fe is located in the heart of downtown Santa Fe on Palace Avenue. The site is adjacent to St. Francis Cathedral, built by Archbishop Jean Baptiste Lamy between 1869 and 1886. In the 1910s, a portion of the property was a dormitory for the Sisters of Charity. The primary facade is from the 1950s St. Vincent’s Hospital, designed by John Gaw Meem, and is an excellent example of late Territorial Revival style.

The hospital remained in the building until 1977. After that, the structure housed numerous important offices of theNew Mexico Department of Cultural Affairs. The site was also used for movie sets, featured in many major productions as well as offices for the New Mexico Film Commission. All of these past entities are integral parts of Santa Fe’s rich history, making it an important landmark for the local community.