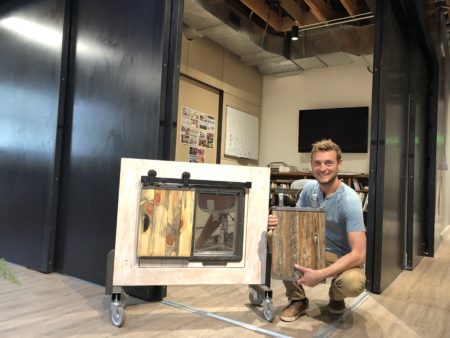 The day Luca Marino-Baker learned he’d been accepted into the 2018 bizMIX cohort was bittersweet. The experience would help him launch Bow Wow Haus, his own business custom designing dog (and cat) doors, which he’d first dreamt up a decade ago as a recent college graduate. It also was the day his father, who had been ill, died, after urging his son to take the plunge and create his own business. “It took that to light a fire,” Marino-Baker says. “A lot of stuff culminated last year and I knew that if I didn’t try it now, I probably never would.”
One year after completing the bizMIX program, through which Marino-Baker was awarded $3,000 in cash, as well as a Santa Fe Business Incubator Affiliate client membership and other prizes totaling $5,650 in value, the entrepreneur and trained architect has numerous clients with whom he has worked or is currently working to install custom-designed dog doors, made from locally sourced wood and steel.
Bow Wow Haus was born out of and integrates Marino-Baker’s multiple interests and passions: his background as an architect, love of design, passion for working with clients and, of course, a love of dogs (he has three Scottish terriers).
Marino-Baker grew up in Santa Fe. As a college student at the University of New Mexico, he studied archaeology, drawn to the romance of cities and their histories His mother, who had saved all of his drawings, pointed out how often he drew buildings and cities. The observation launched him toward architecture, and he moved to California where he got his degree in the field from Woodbury University. That experience included studying abroad in both China and Paris, as well as working on projects that examined sustainable building in desert communities. He graduated in 2008 and immediately began working for a firm in Malibu, Calif. But the recession stuck hard, and Marino-Baker returned home to Santa Fe, and to a job in retail at Lucchese Boots on the Plaza. He loved it—both working on custom design and working directly with clients. Still, architecture called. He logged a few years at a firm working primarily on bids for state projects, work that didn’t move him. He was drawn to the architecture firm Autotroph, known both for its innovative work on facilities such as Meow Wolf, as well as its out-of-the box residential projects. He was there for three years, and currently still works with the firm as a consultant. But in 2018, he was ready to take the plunge and go out on his own.
He had the name Bow Wow Haus in mind since graduating from college, but had put it on a back burner.
“A friend of mine who has a startup nudged me,” Marino-Baker says. “He said, ‘you’ve talked about this a couple of times. I don’t want to hear about it unless you’re doing something.” That nudge catapulted Marino-Baker to throw in an application to bizMIX. He had old models and lots of ideas for both custom dog houses and doors. The process of pitching those ideas over the course of the accelerator lead him to hone in on dog doors, although he’s still open to developing more products and accessories down the line.
“What I realized through bizMIX is not only is there the money here and interest in artistry and handmade things, but a particular aesthetic, rustic contemporary, and that I could use my hometown where I have connections with realtors and builders and designers and makers to really start a boutique business.” Bow Wow Haus, he says, ” is taking pet-centered design from a kitschy, tacky place…into the realm of high design, making it fun but also functional and beautiful and taking it seriously.”
For example, Marino-Baker is working with a client on a Japanese-inspired door that will integrate with the home’s Japanese shōji screens, and blend in with the existing cabinetry. Bow Wow Haus isn’t Marino-Baker’s only venture, though. Through his other company, High Desert Creative, Marino-Baker also is taking on architecture, interior design and some landscaping projects. Some of those clients are becoming Bow Wow Haus clients, he says, “so the two companies are interplaying.” And his background in architecture has helped him work with clients on a variety of fronts, such as maneuvering through historic design requirements in order to incorporate a doggy door into a home in a historic district.
Marino-Baker creates all the work, and has done so at both local manufacturing company Extraordinary Structures, and makerspace Make Santa Fe. He’s had some help with installation from his boyfriend Marshall James, but for now is a solopreneur, although he says down the line he can imagine bringing in a partner.
When asked to offer advice to the current bizMIX cohort, Marino-Baker advised being open to ideas, and ready to shift gears if needed.
“Talk to as may people as possible, listen and also be selective about the information that is pertinent to you,” he says. When it comes to the final pitches and presentations, he adds, “prioritize what’s most important, what is going to supplement that pitch? You can’t do everything and you’re not going to be good at everything.” And no matter where are you with your business, “it’s never too late to pivot. You have to be flexible.” 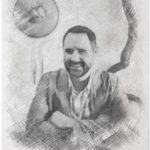 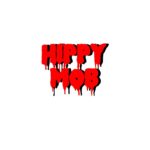 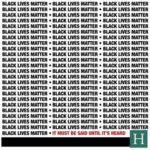 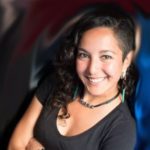 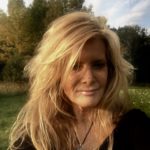 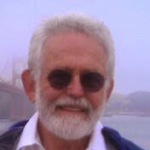